Heads and minds in the Clouds

Head in the clouds from time to time is not a bad thing, in fact, everyone should take some time away from the troubles of the world. And, while drifting awhile “up there” putting our minds on the clouds can be interesting and informative.

From the windows of an airplane on a recent flight thick layers of clouds scattered here and there looked like handfuls of mini-marshmallows. It’s fun finding familiar shapes in the clouds. And while the Bible speaks metaphorically of a “cloud of witnesses,” sometimes it seems we actually can see human faces and forms looking down from above.

In fourth grade long ago my teacher set up a contest wherein one student’s letter would be chosen and mailed to the National Weather Service to ask for a wall chart of cloud types.

That memory while flying through the marshmallow sky rekindled an interest in clouds. A little research shows that several people have put their minds on clouds and written a lot about them.

For example a certain Brit, Gavin Pretor-Pinney, so loves clouds and cloud-spotting that he formed the Cloud Appreciation Society. 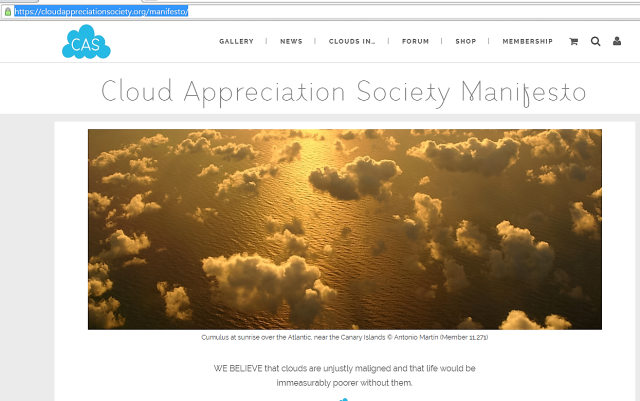 “Friends” from around the world can sign up for free; join as a “Member” for the equivalent of U.S. $12 plus $19.45 annually; or as a “Supporting Member” for $12 plus $35.30 annually. Gift memberships cost $12 plus $14.40 for the first year; the latter three rates also cover shipping of a package of cloud-spotting tools and logos.

And to bring it all into the digital world, for only $2.99 iPhone owners can download the Society’s cloud-spotting app and explore 40 cloud types and submit photos.

Digital technology makes it possible for anyone interested to capture and share cloud images from wherever they find them. Margaret LeMone, a cloud researcher in the Boulder, Colorado National Center for Atmospheric Research (NCAR), said that cloud enthusiasts can be helpful to meteorologists.

Pretor-Pinney also wrote the Cloud Collector’s Handbook, and as reported in June 2009 on NationalGeographic.com, has named what may be the first of a new type of cloud since 1951 – the undulatus asperatus.  Click through the link to see photographs of the thick, rolling-ocean-wave type clouds submitted by laypersons to National Geographic.

National Geographic published a related article in 2010 about studies since the 1940s of hole-punch clouds, the discovery that airplanes create them, and furthermore,  “that aircraft can unleash precipitation by carving the cloud tunnels, which had never before been observed.”

… under certain atmospheric conditions – cloud layers with temperatures about 5 degrees Fahrenheit or lower, for example. When planes fly through these cloud layers, the tips of their propellers make the surrounding air rapidly expand and cool. The supercooled water droplets in the clouds then freeze into ice particles and turn into snow or rain as they fall to the ground, leaving behind both changed weather and the intricate gaps in the clouds….

For now, however, the National Weather Service classifies clouds according to three categories and ten basic types that represent sunny, warm, cold and/or stormy conditions:

Kids interested in learning about clouds and how to predict weather by cloud-spotting will find resources online, such as WeatherWizKids.com.

This entry was posted in Did you know?, Science and Nature and tagged airplane clouds, cloud appreciation, cloud types, cloud-spotting, clouds, NCAR, NOAA. Bookmark the permalink.