In Praise of Possums…

Opossums never inspired much of my time or attention before but lately, more than a few lie dead in or alongside the road. Aside from being accused of “playing possum” as a child, I knew very little about them.

Opossums are not rats!
Before studying them more thoroughly, I had dismissed them as a type of creepy rodent, but alas! Not so – not true at all.

In fact, opossums, or possums as they are often called, not only are NOT rodents, but they are the only marsupials living in the United States and Canada. Like kangaroos that we find more appealing, they are mammals that carry their young in a pouch.

New babies, according to National Geographic, tiny as honeybees, are born after a gestation period of only 12-13 days in litters up to 20 “joeys”, but fewer than half survive to crawl into their mother’s pouch where they are nurtured for about 4 months.

Michael Lipske, writing for National Wildlife Federation (NWF), thinks the opossum is not well thought of because of its long, naked tail. Even so, their tails are part of what makes them unique. 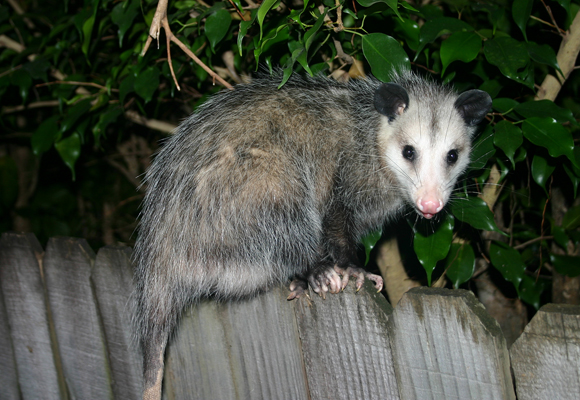 Like monkeys, opossums can wrap their tails around branches to help them climb trees. They can even carry grass and other vegetation—material they use to line their dens—in their coiled tails.

Opossums are not rabies carriers!
Another popular misconception is that possums carry rabies; wrong! In fact, according to the National Opossum Society’s fact page, possums are less susceptible to rabies than cats, dogs, cattle, goats and humans!

Opossums do have their weaknesses…
Yet, they are not perfect or perfectly harmless; they do carry fleas, may sometimes attack chickens and bite people who try to grab them.

They can be bothersome as foragers that knock over trash cans and sneak into pet food when left outside and uncovered. On the other hand, they catch and eat many real pests including cockroaches and beetles, rats and mice, snails and slugs. Opossums also eat roadkill, an activity that often leads to their own deaths.

But also their unique strengths…
NWF suggests we reconsider our feelings about opossums. After all, they eat rattlesnakes and survive their bites. This is significant in that:

Researchers are studying the toxin-neutralizing factor in opossum blood in hopes that it can be adapted as an anti-venom in humans.

Opossums help control Lyme disease!
A Cary Institute of Ecosystem Studies report on the Virginia opossum revealed they groom themselves in much the same way as cats. Although they forage in tick-infested areas, they “hoover up” killing 90-95 percent of ticks that try to feed on them. Thus, they are important warriors against Lyme disease.

Ecologists, environmentalists and wildlife experts ask motorists to do their best to go around opossums on the road that appear to be dead, and not to hit them intentionally. They ask homeowners to tolerate them in their yards, noting they stay only 2-3 days in one place, moving frequently between their nesting areas.

Not really that ugly…

Supporters hope word gets out about the contributions opossums make to ecology, the environment and human health. If so, perceptions can change, and people may begin to think of the odd little creatures as a little more attractive!

This entry was posted in Animals, Did you know?, Health and wellness and tagged Lyme disease, marsupials in the US, opossums, opossums and rabies, opossums and ticks, rattlesnake anti-venom, wildlife. Bookmark the permalink.