Google search returned 580,000 responses to the question “Why did the turtle cross the road?” but it is not at all about jokes looking for punchlines.

In fact, female turtles in early summer are often on a mission to return to their familiar nesting grounds with the eggs they carry, as explained in an article by the Mid-Atlantic Turtle & Tortoise Society (MATTS). Others are moving between wetlands habitats, and still other young turtles are searching out a place to live.

The nation’s turtle population declines every year because they are killed by automobiles.  Yet, many drivers and passengers, seeing them on the roads, instinctively want to help them get safely across. MATTS offers tips and for snapping turtles, a video demonstration because of the need for special handling.

Most importantly, drivers must not put themselves in danger on busy roadways. If possible on a road without traffic, let the turtle cross on its own. And, if safe and necessary to help it along, move it by the shortest distance possible, away from the roadside and in the same direction it was headed when first spotted.

Thoughtful motorists will obey speed limits and keep watch for the fascinatingly odd creatures which are the oldest living reptiles on earth.

Read about Missouri’s turtles in the Missouri Department of Conservation report whose cover page is shown below. 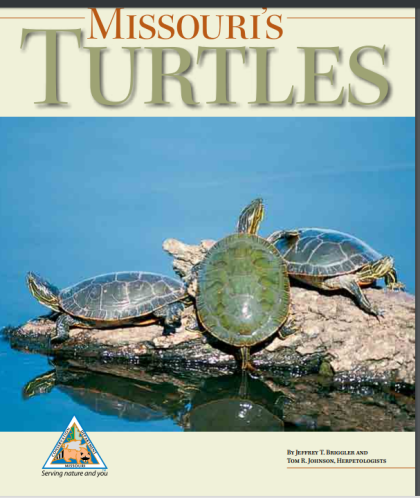 Fourteen (14) of Missouri’s 17 turtle species are protected and on the endangered list.

It is illegal to shoot or in any way to harm or kill protected turtles.

Operation Game Thief  offers rewards from $50 to $1,000 to individuals who wish to be considered for rewards when arrests result from reported actual or suspected wildlife violations.

Individuals may report anonymously, if preferred.

Collecting turtles for pets poses a threat to their well-being as well. The stress of an unnatural environment could kill them. Alternatively, marshy areas and woodlands on personal property can provide them a safe and natural environment.

Other facts about turtles reported by the Department of Conservation: they are not harmful to game fish, or to swimmers who leave them undisturbed, and are “beneficial scavengers.”

This entry was posted in Animals, Did you know?, Laws and Legal and tagged endangered species, helping turtles cross the road, Missouri turtles, Operation Game Thief, turtles crossing the road. Bookmark the permalink.