Severe wind and thunderstorms brought down several trees and uprooted many others in Sterett Creek on Wednesday night, July 1. (See photos below.) One road was blocked for a good part of the day by an uprooted and toppled tree whose thick trunk made passage impossible until a portion of its middle laying across the road, wide enough to allow one car at a time to pass through – very carefully – had been sawed out and removed.

Residents remembered a similar time when a storm – labeled a “microburst” – that hit in July 2012 left the Sterett Creek Marina turned over and several boats damaged or completely sunken.

Neighbors helped neighbors clear their properties and driveways by gathering broken tree limbs, loading and/or dragging them in golf carts to an open common area. 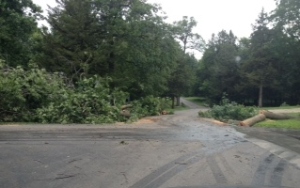 This entry was posted in Other stuff and tagged Sterett Creek, storms, Warsaw Mo. Bookmark the permalink.