This report reflects temperature changes on January 1st, every 5 years from 1945 – 2015 and 2016, in five East Coast cities from Maine to Florida.

Typical climate in the region, in excerpts from world atlas online is described as:

New England states experience warm summers with cool mornings and pleasant evening conditions. Winters in the northeast “…are often quite cold with heavy snow and sub-freezing temperatures…;” and, occasional hurricanes “…strike the eastern coastline and Gulf of Mexico states from June through October.”

Madawaska, Maine is the northernmost city on the East Coast, and Key West, Florida is the southernmost.

The first chart below shows average highest and lowest temperatures for the cities mentioned above, and for JFK Airport in Jamaica, New York; Logan Airport, Boston, Massachusetts and Norfolk International Airport in Virginia. 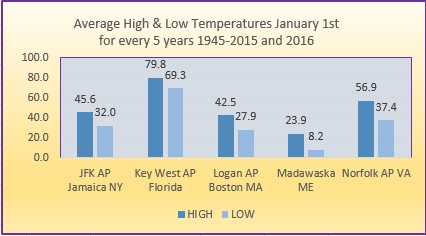 The Maine and Florida charts arrange the years in order of the lowest temperatures for each January 1st in the 1945-2015 and 2016 time period. 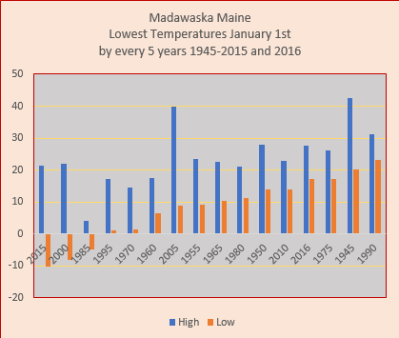 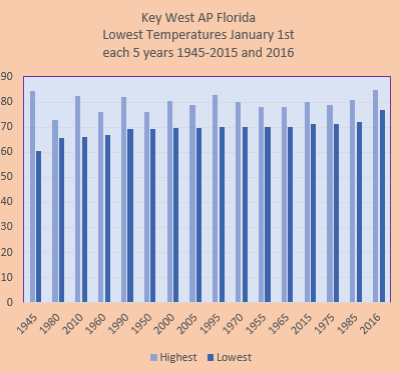 JFK and Logan Airport charts list years in order of the highest temperatures for each January 1st in the 1945-2015 and 2016 time frame.

The lowest temperature occurring on the first day of the year in the same period was 21°F in 1970.

Highest January 1st temperature at Logan Airport in Boston was 59°F recorded in 1945. 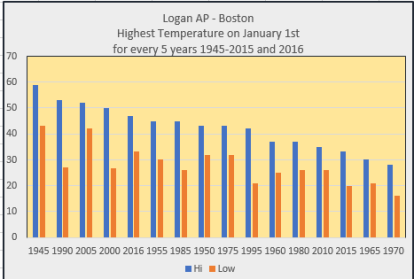 Norfolk International Airport in Virginia is midway between Madawaska and Key West. 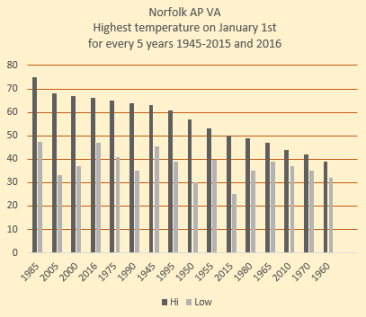