Posted on October 6, 2016 by bcenterprise

FBI Director Comey, speaking to the National Association of Attorneys General in February 2015 said that “… I have homegrown violent extremist investigations in every single state…we have investigations of people in various stages of radicalizing in all 50 states.”

On Tuesday, October 4, 2016, U.S. House of Representatives Homeland Security Committee released its Terror Threat Snapshot (excerpted below). Click on the map for the interactive version that identifies suspects and where they were arrested. 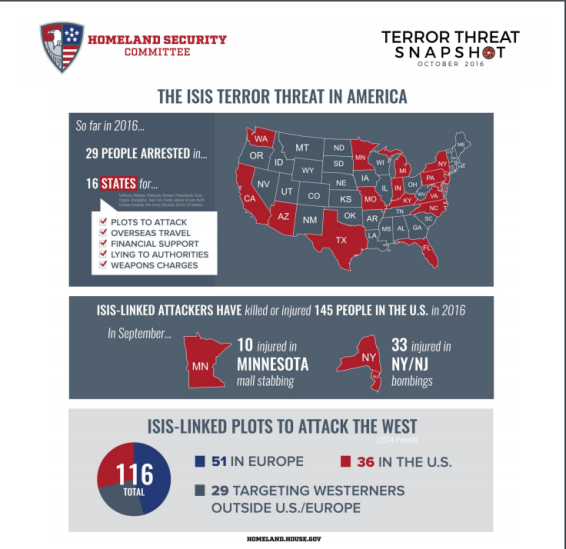 The New America.org website defines its project as: “A comprehensive, up-to-date source of online information about terrorist activity in the United States since 9-11.”

According to the interactive chart compiled by New America, from 2001 to the present, there have been 381 cases of individuals “…engaging in jihadist terrorism or related activities, ” including 27 who died.

Two infamous cases in 2001 involved Zacharias Moussawi and Richard Reid. Most recently, of the 32 individuals who died or were arrested for terrorist activity in 2016, Ahmad Khan Rahami, was charged on September 20, 2016 in the New York-New Jersey bombings.

Also among cases this year was Safya Roe Yassin from Buffalo, Mo. who was arrested in February 2016, charged with communicating threats of violence over the internet and was indicted by grand jury in Springfield, Mo. in July 2016.

Ms. Yassin set up nearly 100 separate Twitter accounts on which she retweeted posts that called for killing of government officials, military personnel. Some original tweets gave names, addresses, family member information, and other personally identifiable information (PPI) of individuals targeted by ISIS and/or other terrorist organizations.

Some claim the arrest raised free speech issues, because Yassin did not plot or carry out any terrorist activities herself.

This entry was posted in Laws and Legal, National Security and tagged homegrown violent extremists, House Committee on Homeland Security, ISIS threat, jihadist activity in US since 2001, New America.org, retweets and free speech, terrorist activity in U.S.. Bookmark the permalink.